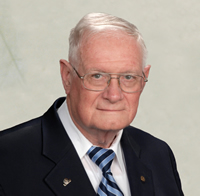 For 35 years, Ross Judd has been a leading advocate for the fair assessment of international engineering graduates seeking licensure in Ontario. This long-time influence on the profession has been essential to the quality and continuity of PEO’s admission process.

Ross was first inducted into the Order of Honour as a Member in 2002 for two decades of service on PEO’s Academic Requirements Committee. He subsequently chaired the committee for four years and continues to shape its long-term objectives of fundamental fairness to all PEO applicants and high standards for the protection of the public.

Described by his committee colleagues as the “corporate memory” of the admissions process, Ross is often relied upon to explain the origins of current practices and is viewed as a prime resource when considering complex licence applications.

Also noteworthy are Ross’s ongoing contributions to the development of national standards. In 2009, he was appointed by PEO council to the National Framework for Licensure Task Force (or NFTF), which is considering aspects of the licensing process for inclusion in the Canadian Framework for Licensure. Ross’s input to the NFTF has enabled PEO to take a leadership role in the development of national admissions principles.

Although officially retired in 2001 from his position as a professor in the department of mechanical engineering at McMaster University, Ross is still an active faculty member who enthusiastically promotes the value of licensure and professional ethics to undergraduate students. In 2012, he was recognized by the university for his significant contributions to the faculty for over 50 years.

"Throughout my career,” he says, “I have strived to serve the students, the faculty and the members of the profession."