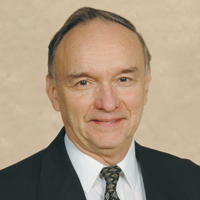 An altruist at heart and a tireless promoter of the engineering profession, Phil Maka has been an inspiration to his professional colleagues during his 25 years of service on the Mississauga Chapter Executive. First recognized for his service to PEO in 1998 when he was inducted into the Order as a member, Phil has continued to place the best interests of the profession above all else.

He first joined the Mississauga Chapter executive in the mid 1980s when he was working as a metallurgical engineer with Ontario Hydro Operations. His contributions have helped to transform the chapter into one of the busiest and most successful in the PEO system. Phil has held every position on the executive, including serving three terms as chair, and is credited with organizing and leading such innovative initiatives as the chapter’s mentorship program and highly successful licence certificate presentation ceremonies. His influence in the community has included establishing a role for the chapter in regional science fairs. He also chaired the chapter’s Government Liaison Program committee, resulting in elected officials commonly attending chapter events.

Devoted to ensuring strong governance at PEO, Phil was elected to council in 2003 and served eight consecutive years as a West Central Regional Councillor. His extensive chapter experience served council well during his eight years of work on the Regional Councillors Committee, including two as its chair. He also provided a trusted voice on other committees and task forces, including service on the Discipline Committee from 2003 to 2013.

Phil also represents PEO on the boards of Engineers Canada and the Ontario Association of Certified Engineering Technicians and Technologists. He believes volunteering allows individual members to help mold the profession into a future of which we can be proud.