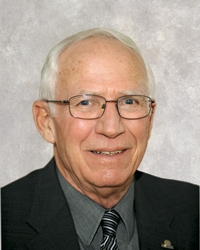 Since becoming a Member of the Order of Honour in 2003, Dave Robinson has continued his impressive leadership within the profession with his trademark determination.

Originally recognized, in part, for 30 years of service to the North Bay Chapter, Dave continues to be a pillar of strength to the local membership, contributing to its growth through participating on the chapter’s executive as well as its Government Liaison Program Committee. He provided a strong voice for the vast Northern Region from 2004 to 2006 as a regional councillor on PEO’s governing Council, and also as a member of the Regional Councillors and Regional Nominating committees.

Dave has also been a motivational force as a member of several PEO committees, including the Awards Committee for five years and the Discipline Committee since 2004. As chair of the Discipline Committee for the past two years, he has been instrumental in improving the administration of PEO’s discipline process by implementing measures to reduce the backlog of hearing cases and championing innovative resolution techniques. He also enlisted sitting judges and experienced trial counsel to help train committee members to hear and adjudicate cases against licence or Certificate of Authorization holders facing allegations of professional misconduct or incompetence.

Dave continues to promote "The Calling", a montage of engineering images produced with renowned photographer Ed Eng as a millennium project while Dave was chair of the North Bay Chapter.